admin
Friday, 13 March 2015
Facebook Twitter
On March 12, 2015 (6:08 pm) i have received an email regarding Google's Project Hosting Service, in that email clearly described that Google Code shutting Down its Project Hosting Service. If you have hosted your coding files on GC then you have to move your all projects to GitHub for saving your all hosting files. Because for helping users to get current projects off the site, Google has shown a tool "Export to Github Tool" so that webmasters could easily migrate their hosting projects.

The service was first time started in 2006 with the goal of providing a reliable and scalable way of hosting open source projects to users including all peoples like bloggers, newbies etc. and since that time millions of peoples have contributed to OSPH on the site. Google Code’s mission to provide open source projects a home has been consummated by GitHub and Bitbucket. 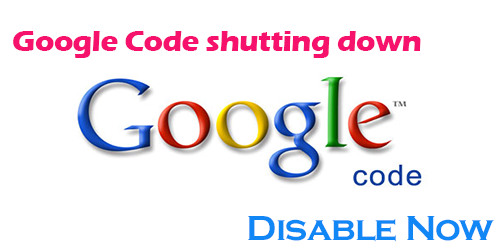 Finally, on January 25, 2016 the GoogleCode service will be shut down. After that, webmasters will be able to download tarballs of projects and those downloads will only be available through the end of 2016.

They will be shutting down Google Code over the coming months. Starting today, the website will no longer accept more new or upcoming projects, but it will remain functionally unchanged till August 2015. After that time, whole project data will be read-only. Early on next year, the site will shut down, but the projects data will be available to download in an archive format.

What to do now?
How To Migrate Your Hosted Data Off Google Code
The simplest option would be to use the Google Code to GitHub Exporter Tool, it is a new tool that will allow users to export their projects directly to GitHub with ease. You can also migrate to other alternative services such as Bitbucket, and SourceForge manually. For more information please visit Open Source Blog.

Your Blog Description here by Goomsite.net